TIL: The word “map” comes from the medieval Latin Mappa mundi, wherein mappa meant napkin or cloth and mundi the world. In essence, “map” is the shortened term referring to a two-dimensional representation of the surface of the world.

The functions of maps do not only cover the physical representation of the three-dimensional surface, as traditional maps do. In today’s digital world, maps can be further visualised to include more versatile data such as traveling time, running tracks, habits of users, and many more. These data are also often made interactive online.

What’s more interesting is the wonders of maps are not limited to real life. A Song of Ice and Fire map encapsulates the best examples of fictional map where it capture a snapshot of the world during the time that George R.R. Martin’s series is set. We’ve seen the history of the world told through a series of political maps. We’ve even seen a map of the world’s geological history. Each of these maps considers the story of Martin’s world, but in a different way.

Fictional maps depicting the places in literature had been designed as early as Middle Ages and the Renaissance. Fascinated by the Marauder’s Map that can reveal people’s locations (a Harry Potter-esque version of open sourced map) and the mortal lands of Middle Earth for The Lord of the Rings, among others, we take a look at some famous fictional maps and their stories. 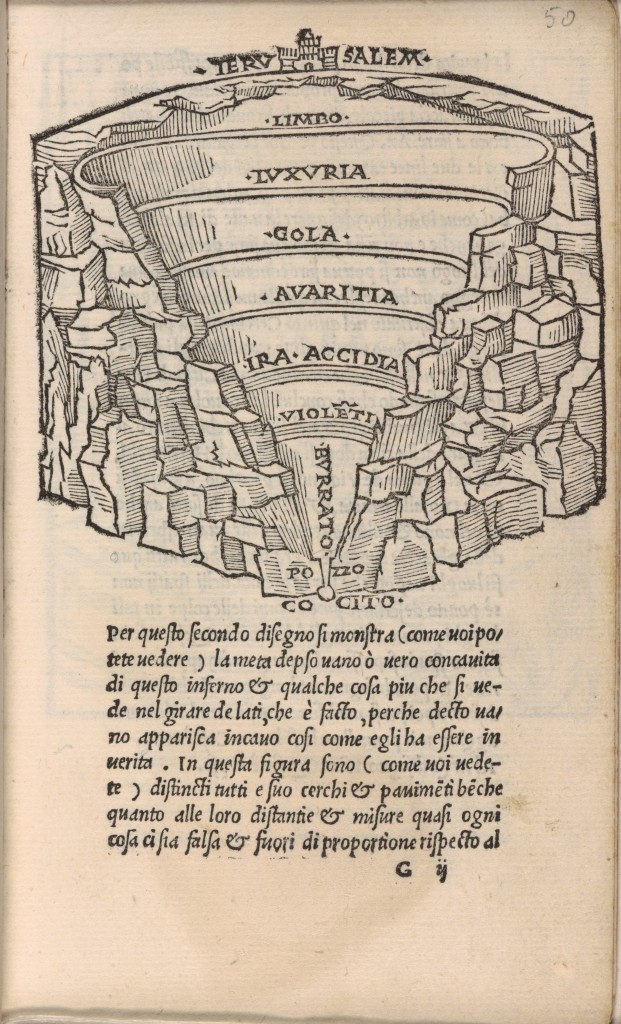 “Overview of Hell” by Antonio Mantetti, 1506

Probably the most famous fictional map dating as early as the Middle Ages and the Renaissance is the depiction of Dante’s Hell from the Divine Comedy.  The cantos were written by Dante Alighieri, in which the author travels through hell, purgatory and paradise, aided by illustrations so readers could embark on their journey with Dante. One of the illustrators was Antonio Manetti, an Italian mathematician and architect from Florence, who was also the biographer of the architect Filippo Brunelleschi of the Florence Cathedral fame.

His maps spurred the study and refinement of Dante’s world, where it was said, “Dantean cosmography became an intellectual fad that attracted the attention of some leading thinkers, including no less a figure than Galileo Galilei.”

There are now a number of modern representations of Dante’s levels of hell in Inferno, as shown in the first photo. 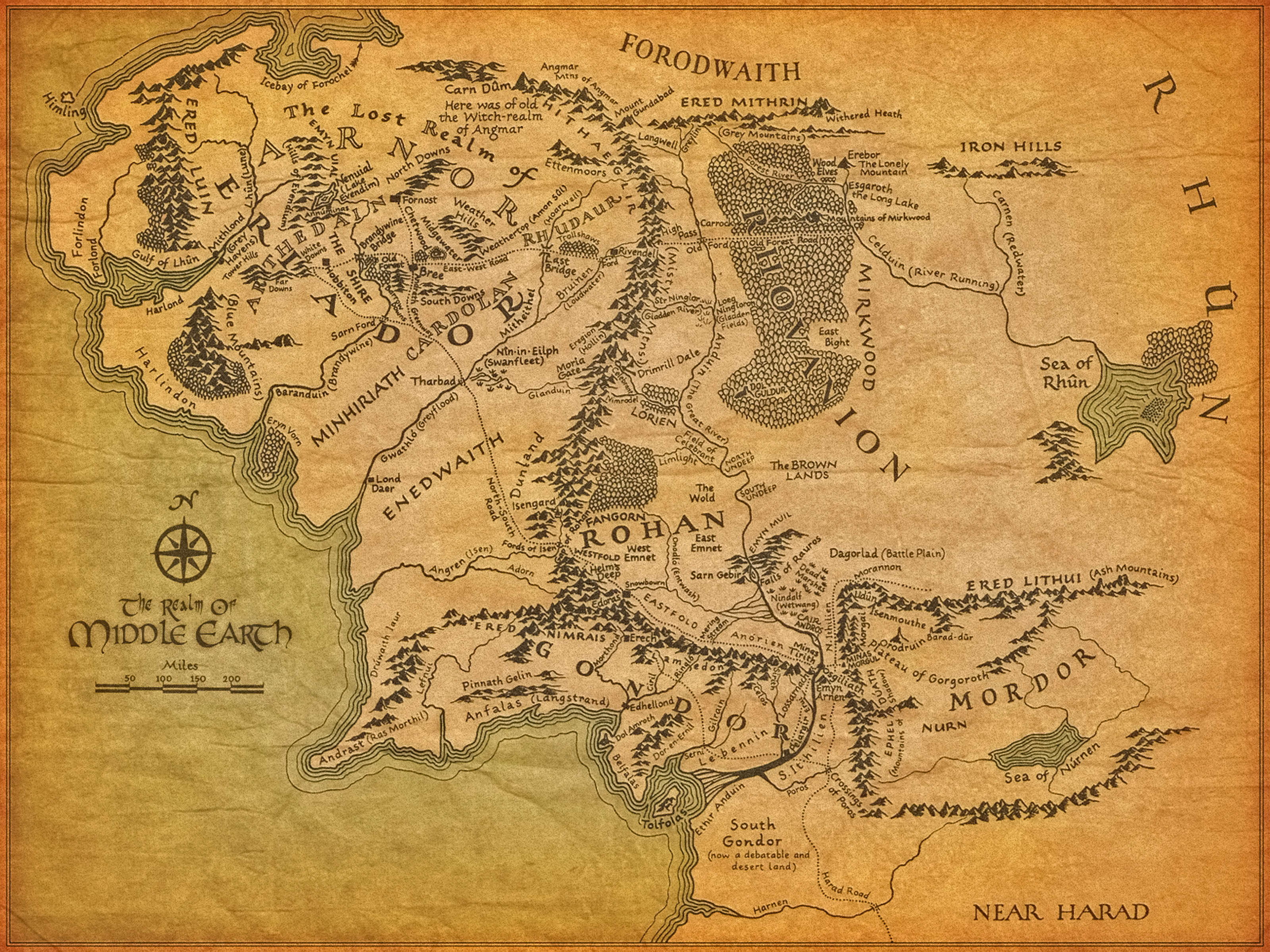 A post about famous fictional maps wouldn’t be complete if we are not talking about the Middle Earth. J.R.R Tolkien did not just write The Lord of the Rings – he drew it. The Lord of the Rings was a turning point in the history of fantasy map-making.  J.R.R Tolkien is a master world-builder, creating several conlangs (constructed languages) for his races as well as a world so detailed that many, many people have created their own maps of it over the decades.

The many maps and sketches he made while drafting The Lord of the Rings informed his storytelling, allowing him to test narrative ideas and illustrate scenes he needed to capture in words. For Tolkien, the art of writing and the art of drawing were inextricably intertwined. 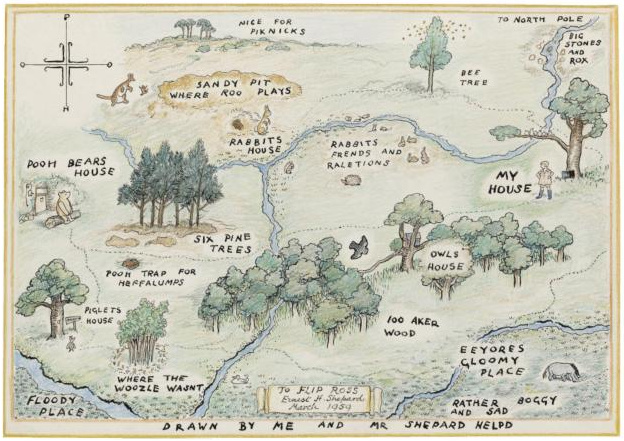 Of course, if you are a fan of Winnie the Pooh and A.A. Milne, you would have come across (and loved) this map of The Hundred Acre Wood, an entire world inhabited by Winnie and his friends. The map was inspired by the beautiful landscape of Ashdown Forest in East Sussex, England, where A.A. Milne’s country home was nearby. Many features from the stories can be identified with specific locations in the forest. 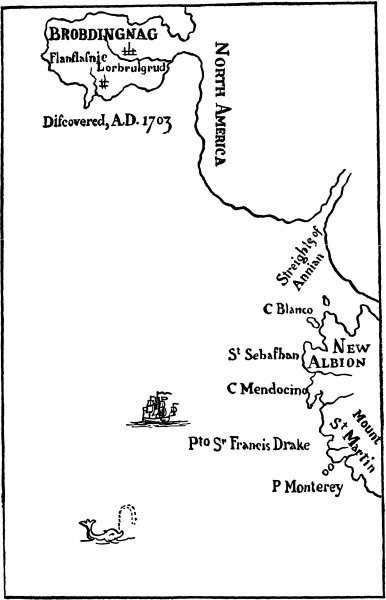 Other notable maps in literature would be Arrakis of Frank Herbert’s Dune, Edwin Abbott’s Flatland, Jonathan Swift’s Gulliver’s Travels (shown above), Jules Verne’s Twenty Thousand Leagues Under the Sea and Mark Haddon’s The Curious Incident of the Dog in the Nighttime.

We’d love to know: What are your favourite fictional maps?

(Bonus: If you’d like to create a map for your own story, here are some useful guidelines. Also, an extensive list of fictional maps in this Tumblr.)